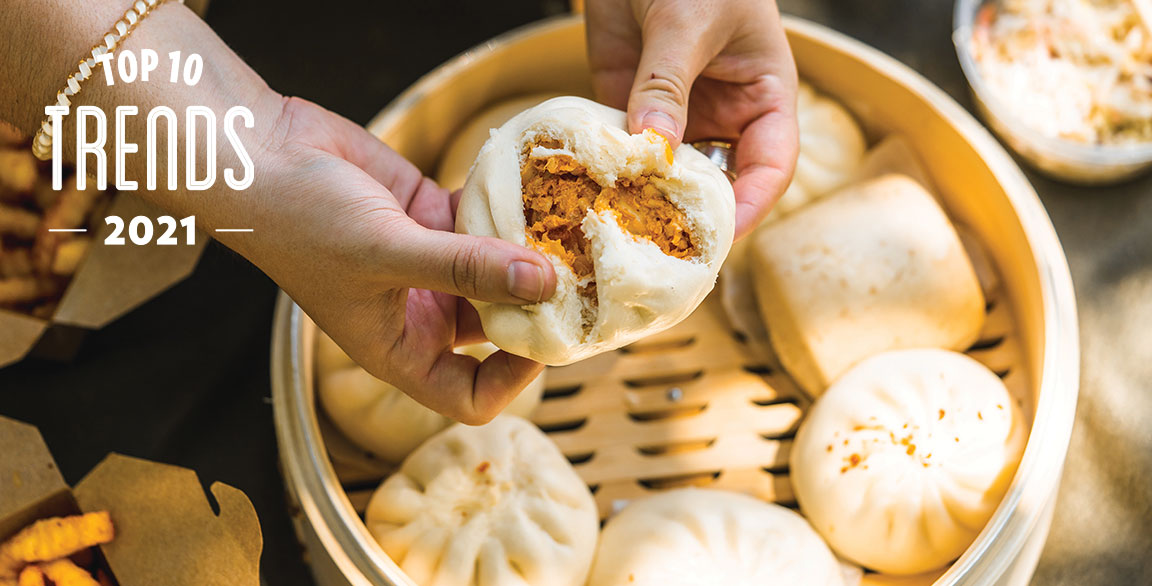 The bao at fast casual Bao’d Up in Texas follow an authentic Chinese recipe, but the fillings, like the Buffalo chicken shown here, embody an American sensibility. Sides include fries tossed in garlic and spices, served with Sichuan spicy mayo.

Something new and exciting is happening with Chinese food on American menus today. We’re seeing inventive flavor play with both classic Americanized Chinese dishes and those that hold closer ties to authentic Chinese cuisine. Overall, Chinese has reigned as a comfort-food favorite for decades in this country, thanks to a foundational cuisine that balances sweet, hot, savory, sour and umami beautifully.

As a delivery go-to, Chinese food has enjoyed a longstanding open invitation into consumers’ homes, solidifying a familial, friendly status. The wide acceptance of Chinese dishes in takeout, given the importance of that business model today, builds momentum for creative menu innovation.

There are many craveable, proven flavor systems in Chinese food that are locked in with American consumers, including kung pao, beef and broccoli, and General Tso’s. Chefs are digging into these tried-and-true profiles and moving them outside of traditional boundaries.

For example, Nick & Sam’s Steakhouse in Dallas leverages kung pao’s bold flavors on its sushi menu with its Kung Pao Lobster Roll, serving up crisp-fried lobster chunks in a kung pao sauce with peanuts and chile threads on top of a California roll.

Forward-thinking concepts that inject a modern American sensibility into Chinese cuisine are showcasing the fantastic potential of unexpected flavor combinations.

Old Thousand in Austin, Texas, serves what it calls “reimagined Chinese.” Its brunch menu applies flavors from the Chinese pantry to surprising formats. Consider the original spin of the Mala Fried Chicken and Duck Fat Waffles, served with Ohio maple syrup and Sichuan butter. Five-Spice Chinese Churros come with a side of pandan cream.

“Incorporating Chinese ingredients and sauces as a foundation and adding a signature twist provides a restaurant brand an easy point of entry for expanding unique, yet approachable menu offerings,” says Jessica Bograd, director of culinary R&D at CSSI Marketing and Culinary. “Using core comfort foods like sandwiches, brunch, pizza, pasta and others, chefs can introduce the complex flavors of Chinese cuisine and take those menu items to the next level.”

Just as Italian-American food formed a separate identity from Italian cuisine, Americanized Chinese has developed its own brand of authenticity, carving deep grooves into the soul of everyday culture for so many people in this country. A host of flavor systems present fresh opportunities, but three stand out as particularly well-primed for menu adaptation: General Tso’s, kung pao and orange chicken.

“These are essentially American comfort foods,” says Michael Parlapiano, strategy director for The Culinary Edge consultancy. “There’s now an exploration of Chinese flavors in a ‘version-two’ model, where the ‘version-one’ model was very Americanized. Chefs are bringing in more regional Chinese influences along with more modern Chinese-American touches.”

Both orange chicken and General Tso’s are Americanized offshoots of traditional dishes found throughout China. They are both insanely craveable, thanks to a crispy-fried chicken that’s tossed in a savory sweet-and-sour sauce. General Tso’s is bolder, packing more heat with its inclusion of chile peppers. Each offers a long runway for flavor exploration.

There is an opportunity on the cocktail menu to tap into consumers’ love affair with Chinese flavors. San Antonio’s combines brandy with Akashi Ume liqueur, aromatized plum wine and five-spice bitters in its Drinking Alone With the Moon.

Chinese has enjoyed a long reign as the food Americans favor for takeout and delivery. When chefs develop recipes inspired by the canon of takeout favorites, they’re getting formats that have earned built-in acceptance as delivery-friendly foods. “There is both nostalgia and a sense of comfort with Chinese takeout,” says Bograd. “As the foodservice industry pivots to more takeout and delivery options, playing around with flavors that already deliver well can be a great base for innovation and inspiration.”

Choosing which flavors to tinker with is the fun part. “Add in flavor twists and you have a recipe for success for not only dine-in dishes, but takeout, too—bold flavors and familiarity at a low cost,” says Kathy Casey, owner of Kathy Casey Food Studios–Liquid Kitchen. She’s betting on the broad appeal of orange chicken, giving it a modern, signature spin on the menu at Chicky, the upcoming virtual kitchen that will operate out of her seafood quick-serve, Lucky Louie Fish Shack at Seattle-Tacoma International Airport.

Casey’s Sticky Chicken Bowl is a play on the classic Chinese-American orange chicken. It features chile chicken bites tossed with a sweet and spicy orange sauce and served over jasmine rice, with sesame cucumbers and pineapple coleslaw. “Everybody loves the orange chicken profile,” says Casey. “It tastes like old-school sweet and sour and it coats food really well.” She adds gochujang, introducing a bolder, deeper flavor. “The bowl travels and holds well—classic Chinese fried items are tossed in sauce and get a little soft,” she says. “It’s part of the charm and it’s not a letdown for diners.” That underpins the advantage of this flavor system in takeout. Consumer expectation around texture and temperature with Chinese food—reimagined or not—is generally more forgiving than with other cuisines.

Sababa, a modern Israeli restaurant in Washington, D.C., found a fresh angle into the Chinese takeout model, and in the process demonstrated a sound synergy between Chinese and Eastern Mediterranean cuisines. The restaurant ran a variety of Chinese-inspired specials on its Christmas pop-up menu.

Clever, craveable mash-ups included a Lamb Rangoon featuring schmaltz-braised lamb shanks that were shredded and combined with labneh, cream cheese, red finger hot chile, garlic and shallots. “When deciding what to do for our second-annual ‘Jew-ish Christmas,’ I was thinking about how well Chinese food travels,” says Ryan Moore, executive chef. “My thought was to do Americanized Chinese food with Middle Eastern influences, flavors and techniques. It was a lot of fun to mash up.”

His take on orange chicken simply swaps out the citrus, using kumquats because they grow in Israel. Sababa’s Kumquat “Orange” Chicken features turmeric-seasoned chicken thighs deep fried and then coated in kumquat-chile marmalade, cut with rice wine vinegar to brighten it. In a final step, the chicken is tossed with preserved kumquats.

Chinese cuisine was plant-forward long before the movement took root in this country, infusing big flavors into veg-centric dishes for centuries. That fluency in flavor building helps operators looking to expand their plant-forward offerings. “Even classics like beef and snow peas were, ironically, veg-centric,” says Maeve Webster, president of Menu Matters foodservice consultancy. “These dishes tend to feature thinly sliced meats and are largely driven by vegetables. Americanized Chinese was one of the first cuisine types in that category, without being positioned as such. But now that positioning is valuable, and menu items that apply these flavors can leverage that advantage.” 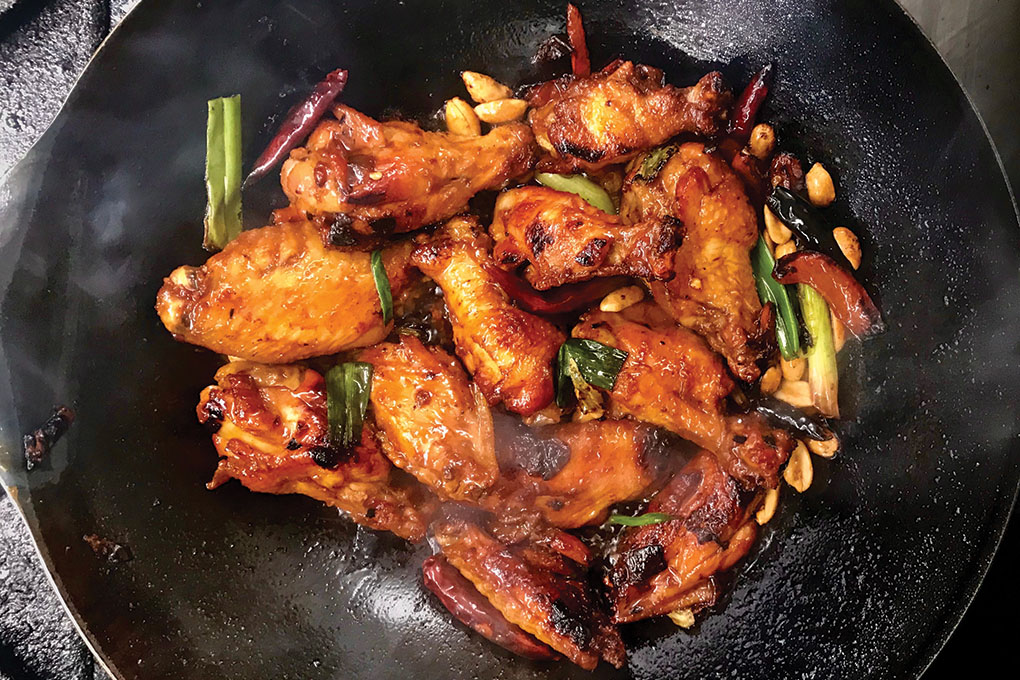 Alex Wu and Ting Lin are on a mission: Introduce American consumers to the ease of bao as a handheld format. “Bao is a convenient and delicious food that we have every day in China,” says Wu, co-founder of Bao’d Up, a fast casual specializing in accessible Chinese comfort food with four locations in Texas. “We’re not necessarily educating our customers on traditional Chinese flavors, but introducing them to the convenience of bao and what we can do with it. We want American diners to become familiar with the bao format, while we add a Texas twist.”

The menu includes Brisket Bao, with spicy marinated brisket and onions, and Buffalo Chicken Bao, with mozzarella, cheddar, savory marinated chicken breast and a fiery housemade Buffalo sauce. The bao, or baozi, are made in-house daily, following an authentic Chinese recipe prepared by Ting Lin, chef of Bao’d Up. “I use a special type of flour from Hong Kong and try to create a balance of texture and flavor,” says Lin.

Customers can order the bao pan-seared, which is not traditional, but caters to the American palate. “Pan-searing makes them warm and crispy on the outside, while fluffy and soft on the inside.” At Silver Apricot, Tong takes liberty with the bao in her Chinese BBQ Pulled Pork, serving it on Texas toast.

Bill Kim, chef/owner of Urbanbelly in Chicago mashes up flavors in his translation of hot chicken, adding cabbage, pickle and lemongrass “fire sauce” to his Hot Chicken Bao Buns. That dish, like many of Kim’s other eclectic Asian-influenced dishes, reflects his culinary philosophy and shines a light on the opportunity with Chinese flavor innovation—get inspired, explore the flavor systems, adapt and build something new. 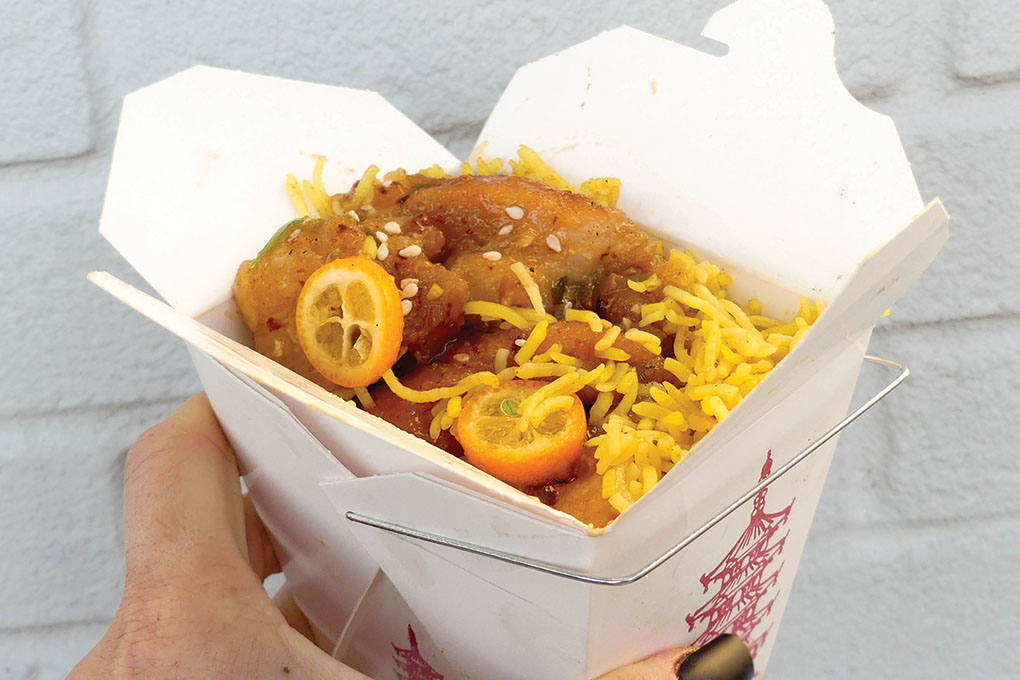 Chinese-American gets a Middle Eastern makeover at Sababa in Washington, D.C., where Kumquat “Orange” Chicken gives the Israeli-grown fruit a starring role.

The Sticky Chicken Bowl, a play on the classic orange chicken, will star on the menu of Chicky, chef Kathy Casey’s new virtual kitchen concept. It’s paired with sesame cucumbers and a pineapple slaw.