According to the American Cancer Society, lung cancer is “by far the leading cause of cancerdeath among both men and women” in the United States.

Most deaths occur as a result of the cancermetastasizing, or spreading, to distant parts of the body.

New research suggests that there may be a nutritional compound that can hinder this process of metastasis. Capsaicin, which is the chemical compound that gives chili peppers their pungent flavor, stopped lung cancer metastasis in rodents and cultured human cell lines.

Piyali Dasgupta, Ph.D., from the Marshall University Joan C. Edwards School of Medicine in Huntington, WV, is the senior investigator of the new study. Jamie Friedman, a doctoral researcher in Dasgupta’s lab, is the first author of the paper.

Friedman and colleagues presented their findings at the American Society for Investigative Pathology annual meeting in Orlando, FL.

How capsaicin works against cancer

The researchers tested capsaicin in three cultured lines of human non-small cell lung cancer cells and found that capsaicin stopped the first stage of metastasis, which is called “invasion.”

Friedman and colleagues also fed mice with lung cancer a diet enhanced with capsaicin and found that these rodents had a much smaller number of metastatic cancer cells in their lungs compared with mice that did not receive the treatments.

Further cell experiments found that capsaicin stopped metastasis in lung cancer by blocking the activation of the Src protein — a protein that is key in regulating the proliferation, survival, and motility of the cells. Friedman and colleagues conclude:

“Our results show that capsaicin directly interacts with Src and inhibits Src activation to suppress the metastasis of [lung cancer]. The results of our studies may foster the development of novel anti-metastatic therapies for human [lung cancer].”

However, the researchers also note that they need to develop capsaicin analogs that would bypass its side effects. 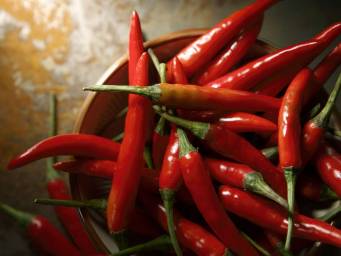 “We hope that one day capsaicin can be used in combination with other chemotherapeutics to treat a variety of lung cancers,” says Friedman. “However, using capsaicin clinically will require overcoming its unpleasant side effects, which include gastrointestinal irritation, stomach cramps, and a burning sensation.”

“Lung cancer and other cancers commonly metastasize to secondary locations like the brain, liver, or bone, making them difficult to treat,” adds Friedman.

“Our study suggests that the natural compound capsaicin from chili peppers could represent a novel therapy to combat metastasis in lung cancer patients.”

This is not the first study to hail the potential health benefits of capsaicin. Previous research found that the compound can inhibit the development of triple-negative breast cancer cells and other studies suggested that it may reduce the risk of colorectal cancer.

Finally, previous research has also suggested that the compound can extend our lifespan.